Bijou Babies, Cream on the Green and Zen Of Essence

Bijou Babies, a baby clothing shop, Cream on the Green, an ice cream parlour, and Zen Of Essence, a hairdressing salon, have all launched in Abbey Green and have given the street a business boost. 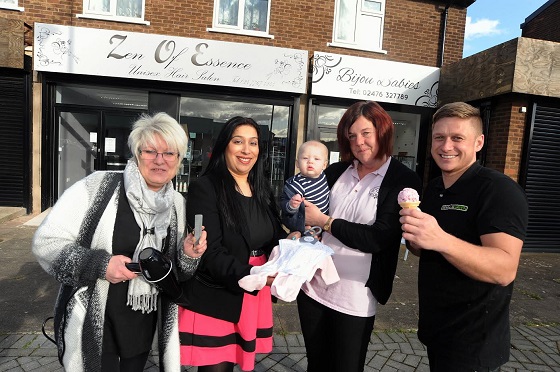 Each store has received start-up support from the Coventry and Warwickshire Chamber of Commerce which has allowed owners to not only develop their respective businesses but also share advice to ensure they’re supporting each other’s growth for the better of the high street.

Workshops and one-to-one sessions from the Chamber, as part of a programme funded by the European Regional Development Fund and Warwickshire County Council, have helped Zoe Holland, owner of unisex salon Zen Of Essence, with a host of business management skills including cash flow, marketing and planning.

Zoe, formerly a lecturer in hairdressing at North Warwickshire and Hinckley College, said: “After having previously managed a salon before, taking the plunge into opening my own was an exciting experience but I recognised I needed refreshing in some areas, which the Chamber made straightforward.

“The workshops were a great resource which helped me form a marketing plan, and since then I’ve visited schools, churches and community centres to introduce the business to people and build a client base.”

Owners of Cream on the Green, Jamie Harley and Donna Beard, have received support in terms of competitor analysis and advice on how to both attract and retain customers.

The guidance helped Jamie to identify ideas which are sustainable for the business long-term. “One-to-one sessions with the Chamber helped us identify which of our concepts will offer the most return on investment and work best with other businesses on the street,” he said.

“Subsequently we now host children’s parties and offer tea and toast to the homeless – two unique ideas – which has expanded our level of service and established the parlour as a community hub that customers return to.”

And Bijou Babies, which specialises in baby clothing from premature up to two years, received networking advice.

Georgina Hurley, who runs the store along with daughter Sarah, said: “We were inspired to start a business after Sarah’s son Jacob was born seven months ago.

“With no previous experience of running a business before, the Chamber has been a valuable resource which helped us identify manageable targets and put us in touch with relevant local groups to help us build a professional reputation.”

The Chamber regularly hosts workshops to support potential entrepreneurs in turning their dreams into a reality.

Hardeep Sandhu, programme manager at the Chamber who advised the three businesses, said: “It’s great to hear of three businesses which are doing well respectively but that also have brought together a street in a lively area of the town to create a thriving business community.

“Launching a new business can be daunting but through our support and by working together cohesively we hope the businesses will continue to build their names and prosper.”

“Workshops like these, which support those in the early stages of starting a business are vital, and we’re delighted to provide assistance. We want to encourage and support as many small firms as possible to start and flourish, and many certainly are.

“Confidence is improving and we are seeing more and more small businesses coming forward.  However, there are undoubtedly challenges on the path to building a successful new company.

“These workshops are designed to provide those thinking about starting a new businesses with the information they need to start their journey on the path to success.”

For more information about the free workshops and start-up support, contact the chamber on 024 7665 4321.